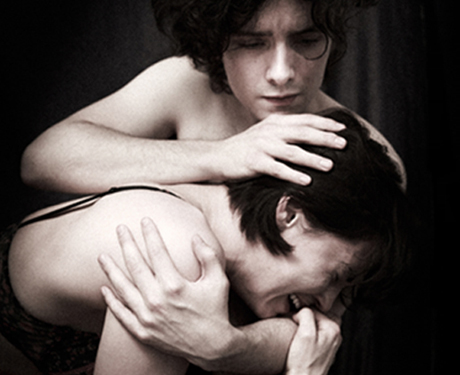 Hendrix is growing up. Or at least he’s trying to. But he’s sick of his mother and her constant preaching on the virtues of an organic lifestyle. And he’s sick of her girlfriend, a twentysomething stunner who winds him up relentlessly. But most of all he is sick of the bullies at school who target him viciously, thinking if his mum is gay then he must be too. In a desperate attempt to prove his masculinity, Hendrix enters a very adult world and gets far more than he bargained for. He meets Luminita – a young girl enslaved into an unbearable life. She finds comfort in Hendrix; a chance to connect, to be seen as a human being. Though from completely different worlds, their secret friendship grows in snatched moments in a sordid room above a Chicken Shop.

This World Premier of Chicken Shop by Anna Jordan, 2013 winner of Bruntwood Playwriting Prize, was one of the final ten plays in the Soho Theatre’s Verity Bargate Award 2011, which had over 900 entries. Since then it has been in development with the Soho Literary team and was on the long list for the Royal Exchange Theatre’s Bruntwood Prize 2011.

“Chicken Shop unequivocally ranks as one of the most important and memorable plays of the year.” – Female Arts

Cast
Angela Bull:Hillary,   Jesse Rutherford:Hendrix,   John Last:Leko,   Lucy Roslyn:Luminita,   Millie Reeves:Katie
Creative Team
Director – Jemma Gross
Designer – Florence Hazard
Lighting Designer – Sherry Coenen
Production Manager – Christopher Silvester
Assitant Director – Charlotte Marigot
Production Photographer – Kim Hardy
Art Designer – Jane Parker
Production Associate – Marnie Nash
Reviews
★ ★ ★ ★  The Times “Epsilon Productions is a thriving independent theatre company. This economical production delivers punchy yet nuanced performances….Compelling, near-tragedy”
★ ★ ★ ★  Time Out “A vivid and startling production”
★ ★ ★ ★  WhatsOnStage “A fine piece of challenging theatre.”
★ ★ ★ ★ ★ Broadway Baby “Breath Taking…a tricky and a heart-wrenching piece of theatre.
★ ★ ★ ★ ★ The Upcoming “The cast here are excellent without exception. Chicken Shop is a play that you simply need to go and se
★ ★ ★ ★ ★  Female Arts “Chicken Shop unequivocally ranks as one of the most important and memorable plays of the year.”
★ ★ ★ ★  Entertainment Wise  “Everyone on their A-game and the big crescendo is really quite distressing to watch… Come the final bows it’s all fallen dramatically and rather chillingly into place. We’ll be looking to the ceiling with dread next time we call in for fried chicken, that’s for sure.”
★ ★ ★ ★  West End Wilma It’s passionate, moving and leaves your mind shocked by what you have witnessed. But it’s also, to quote Katie, “amaze balls”.
★ ★ ★ ★ London Theatre 1 Chicken Shop an insightful piece of drama….which renders the audience speechless.